After placing first out of all the mascots in the Independent School League (ISL), it became apparent that the one thing the Nobles Bulldog lacked was a name. So, The Nobleman conducted an all-school election to determine the official name of the beloved mascot.

In the suggestion box on the Nobleman Instagram, five names showed up consistently. These five names were then put into the survey and 217 members of the Nobles community voted on their favorite names. The finalists were Bartholomew, Betsy, Bussey, Biff, and Big Billy.

It can be tricky to find the perfect name for a dog, but there are some strategies that can help narrow down the list. Even though there is no actual pet bulldog on campus (which is another problem in and of itself), the dog’s name needs to be practical.

Veterinary behaviorists suggest that a dog’s name should be short; either one or two syllables, so that the dog can remember it. Additionally, dogs whose names end in a -y or -ie tend to listen better.

Because the name will go before the phrase “The Bulldog,” it needs to have a good ring to it. Each of the five final contenders start with the letter “B,” and alliteration is always appealing for a name to chant.

This way, when the Bulldog is fighting the Mustang in Nobles-Milton weekend videos or dance battles in the gym, we can cheer for something more specific than “the Bulldog.”

Now the results. “Betsy” only received 3.2 percent of total votes and came in last by a landslide. Unfortunate for the mere seven people who voted for her.

“Big Billy” has triple alliteration, but unfortunately came in fourth place, with only 11.5 percent of votes. It is not entirely clear why Big Billy ranked so low, but a two-word name complicates the chant.

In third place with 16.6 percent of votes was “Bartholomew,” a common name in medieval England. It is interesting that Bartholomew would place in the top three, as it is not traditionally a name for pets, or any person in this day and age.

The name Bartholomew would certainly set the Bulldog apart from other mascots, but unfortunately is not practical enough to place in the top two. Bartholomew is ultimately just too long to chant, and does not have a deep connection to the school.

The remaining two, Bussey and Biff, are both catchy, gender-neutral names, so it was hard to predict which would come out on top. Not surprisingly, the race was tight and the winner only had a five point margin.

31.8% of the Nobles community chose Biff as their favorite name for the bulldog. Special shoutout to the Boys Cross Country team, who must have been responsible for at least half of those votes. Although Biff was a good contender, it will not be the final name of the Nobles Bulldog. Or at least not the first name.

The biggest problem with Biff was that it is the name of the antagonist in the Back to the Future trilogy. However, it would have been delightful to hear students chanting “Biff! Biff! Biff!” as the Bulldog conquered the competition. Biff still lives on as the reliable, unbiased XC reporter.

Bussey edged out Biff for first place with 36.9 percent of votes. Not only does Bussey meet all the criteria for a good dog name, but it also honors Provost Bill Bussey. It is only fair to pay tribute to Bussey (the faculty member) after everything he has done for the Nobles community.

As this is  Bussey’s last year at Nobles, the community wanted to make sure that his name was kept in an important part of the school. He has worked at Nobles since 1987, and his wife, Nan Bussey, worked here from 2007 until 2019. The Busseys live on campus, and their daughters, Sarah (‘18) and Kate (‘16) even attended Nobles.

Naming the mascot after him ensures that the Bussey legacy lives on, long after retirement. The Nobles community will miss Bussey dearly, but Bussey the Bulldog will be a constant reminder of the Nobles character that Bussey represents so well. To make the name official, we urge the school to put a tag on the Bulldog’s collar with the winning name, so that everyone can see it. 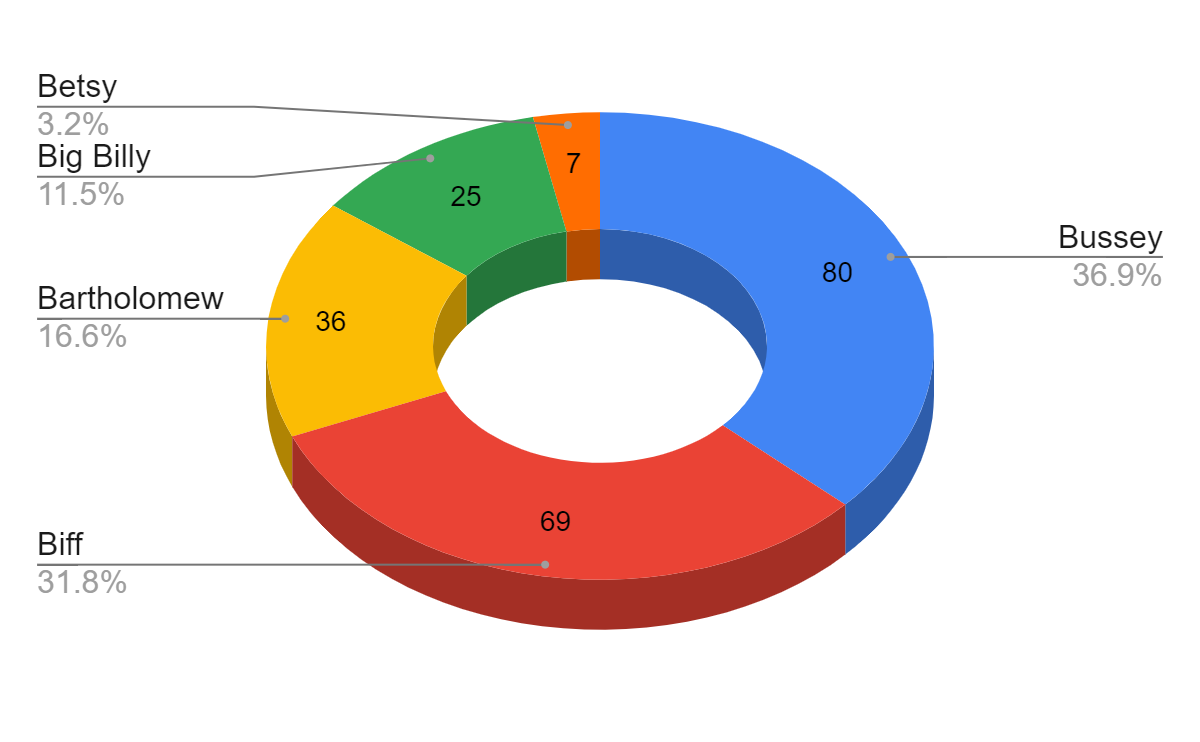 Fantasy Football: Not Just A Game

Best gifts to get you Bae for Valentine’s Day